Improving your TCO with hybrid-rugged devices

Total cost of ownership is something that dominates what businesses strive for in all areas of what they do. Looking at how total costs over time compare to initial costs can often be the difference in success and failure. Making cost efficient decisions, with a known outcome that saves money over time is often good business and for many years, this philosophy held true when buying rugged mobile devices.

How this translate into buying mobile devices for your workforce consists of an in depth look into whether buying typically more costly rugged hardware up front, pays dividends over time and whilst TCO has been a big factor in the decisions companies make when buying their mobile kit, we feel things are due a shake up!

This guide rattles the cage because we think the old "Rugged V Consumer" model is broken and the reason is that things changed because there's a new kid in town and that kid is "Hybrid-Rugged" devices. These lsot right in between the Rugged class and the consumer class when it comes to TCO and as such make a big impact on how you c an look at the TCO of rugged devices for your business. So in this article we look at this new breed of "Hybrid-Rugged" device and how Raptor hybrid-rugged devices not only improve TCO for your business, but how the return on investment is quicker too.

Rugged versus the consumer option 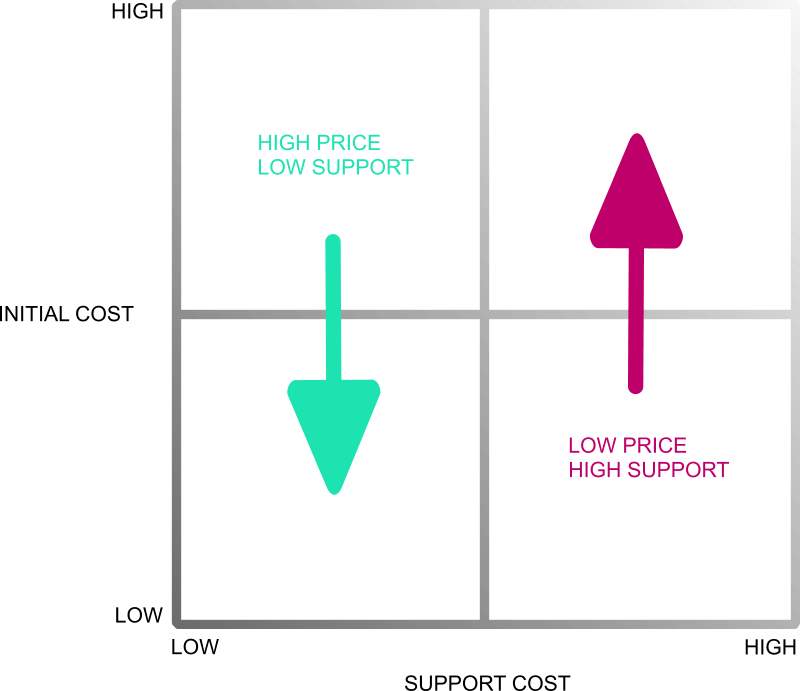 There are many studies conducted by some of the world's most influential analysis companies, in particular VDC and Gartner who can show us just why Rugged devices are the better option when it comes to medium to long term rugged mobile device deployments, and they boil down to the fact that the lower, short term, initial cost of consumer devices is soon dwarfed by the high costs of running and repairing them in the medium to long term.

VDC, has in fact shown, that buying rugged devices, with a far greater initial purchase price, can save up to 51% when compared to buying non-durable consumer devices.

What is this down to?

Costs such as networking/contract purchases needing renewal and software updates required where consumer phones are updated.

Covers theft or loss of desirable consumer phones, loss of business due to hardware failure.

The problem with this current TCO model

So one might be forgiven for thinking that buying a classic rugged device will save money over time. In fact based on when this research was first conducted it will and it makes sense right? However things changed and we at Raptor don't think this tells the whole story.

Many of the savings figures quoted in rugged device TCO articles are based on 5 year device life cycles. As you reduce the number of years you keep your devices, the savings also decrease. Why this is important to note is that in today's modern business world, 5 years is a long time to be relying on the same technology and we've seen a drastic reduction in the number of years businesses are looking to keep their rugged equipment.

Classic rugged devices are still largely based on out dated operating systems and older technology and they also make many other compromises when it comes to their design and usage when compared to a modern consumer device. This makes them hard to use, expensive to learn, inefficient in their usage and this is often overlooked in these reports.

Older classic rugged PDA's tend to serve a particular market and as such have barcode scanner technology built in. This feature can not always be removed so it makes the device more epxensive and also more complicated and confusing to use with extra buttons. As more and more businesses adopt mobile technology, they need an ever increasing set of demands and older rugged devices just aren't keeping up with what these customers need.

Repair costs and services aren't as cheap as many would believe and these TCO reports often assume that the customer has bought multi-year up front support services which are expensive and require further long term commitment. If these contracts are not taken up then it is common for simple rugged PDA repairs to be in excess of £500, with a 6 week turn around for many rugged suppliers.

Of course rugged devices are expected to have a higher initial price. However this can be eye watering, often as much as 3 or 4 times the cost of a consumer device, which can remove accessibility of the technology for some businesses and also make the ROI of a rugged device a lot longer to obtain.

Mobile working is no longer the domain of just large corporates, who can afford huge initial cost implications to attain long term TCO. Most businesses are smaller, need to be more agile and some adopting BYOD mean we're talking about individual workers costs here too. The initial cost of rugged devices is simply too high for these to either afford or have tied up over a 5 year term where technology will also age significantly.

Put short, does the classic rugged TCO model fit the majority of businesses or individual in today's modern business and enterprise world? We don't think so!

There's a clear gap developing here, however there's fortunately also a clear answer that comes from a new breed of HYBRID-RUGGED mobile device.

Hybrid rugged phones are as rugged, if not more rugged than classic rugged devices, however they also don't have the typical compromises that rugged devices bring. Add to this they are far closer to the specifications of consumer devices, whilst being as cheap, if not cheaper than many examples.

Device pricing is often comparable to and even lower to consumer options.

Support products are agile and aimed at shorter ROI cycles. Pricing is transparent and general repairs are cheaper and faster whether in or out of contract which means their TCO model works for any customer. The new breed of rugged supplier is also agile and changes quickly to customer's needs, so support products and services change with them, often in 3-6 month cycles.

Lower initial costs mean that businesses can achieve real ROI far quicker than 5 years, often in as little as 6-12 months. This gives business both small and large the option to either save money by adopting longer ownership, or leaves them free to innovate by refreshing mobile devices more quickly.

Android is your friend

Software, is easy to keep current than on classic and now obsolete Windows mobile platforms. This means ongoing, indirect costs are reduced to almost nothing.

Direct to market hybrid suppliers are in control of their whole supply chain, so they can make decisions quickly, provide any kind of service and support they need to, whilst having a local base of experts for help and advice. This is something that a heavy supply chain network will struggle to deliver. 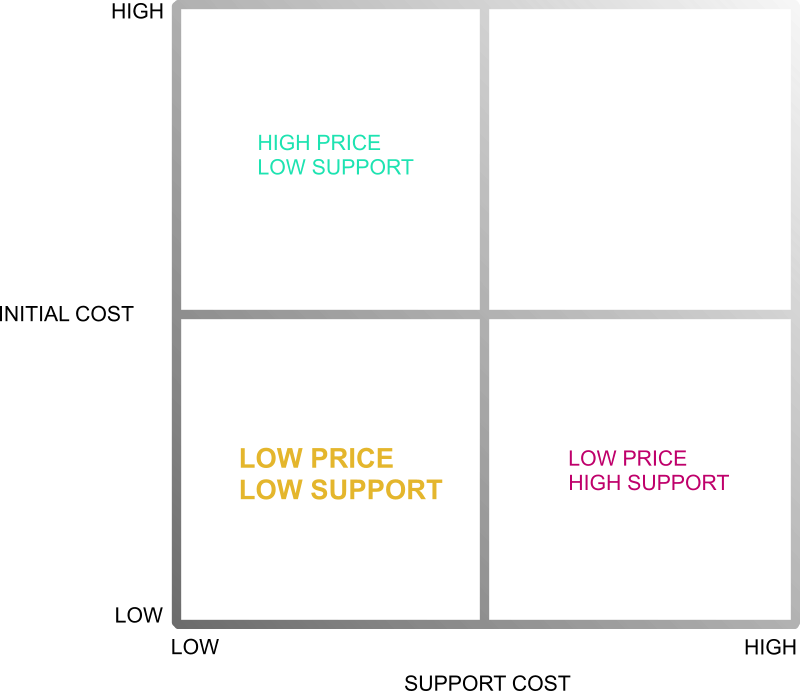 As a reseller for many years, we have years of statistics on how most rugged suppliers have performed through our own support desk and we can prove how our Raptor range has at least as good repair statistics. 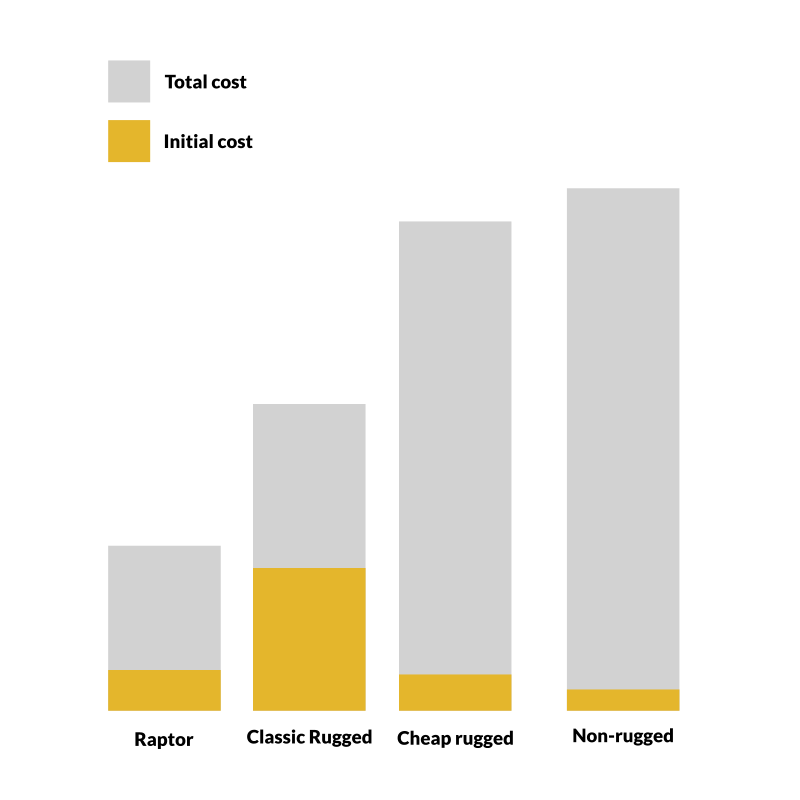 Hybrid-Rugged reach ROI in a far lower time span, whilst enjoying a far greater level of support. This gives customers the option to keep devices for longer or to innovate their mobile technology faster.

We think it's time to challenge the classic TCO model. Try a Raptor and you'll see!

The proof of the pudding

So finally lets see this new TCO model in action with a real live customer! We put our Raptor R5 up against a real life situation where a customer was originally using a consumer phone, whi then turned to a well known classic rugged device and eventually the Rpaotr R5. Uor findings are below. 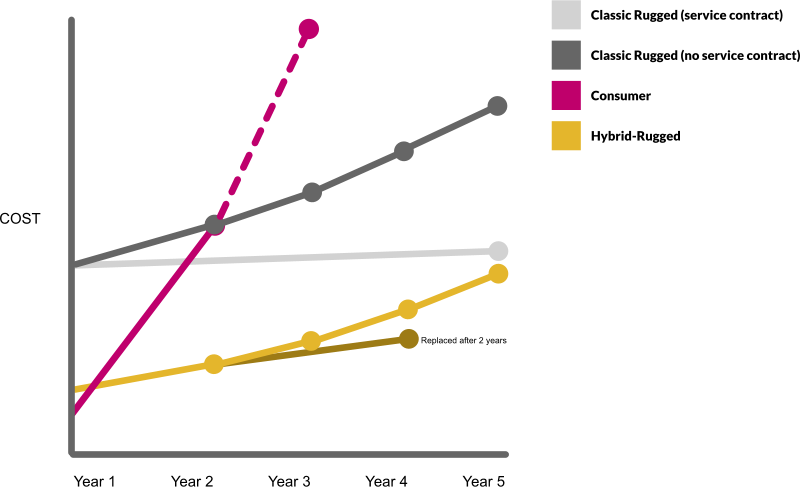 As you can see from above the Rugged device was simply too expensive to ever give great TCO except for the original consumer phone which costs a fortune to support and then went end of life suddenly after about 20 months.

This customer actually purchased the classic rugged device without a support contract, because they simply could not afford the 3 or 5 year support packs up front, so they relied on the basic warranty level of support and this is shown by the dark grey line above.

The classic rugged device performed worse than the Hybrid rugged device (has a steeper line) and this was due to 2 reasons. Firstly that there were more repairs required from the classic rugged device and secondly that the out of service contract repairs were eye watering expensive, so much so that we had to take on repairs ourselves as a reseller. (we supported this customer for over 7 years and have full evidence on our portal).

The Raptor R5 not only came in cheaper up front compared to all but the cheapest devices, but it also gave the customer options, the main ones being:

Hopefully this will get people's mind-sets out of the year 1990 and into the year 2018. TCO is not what it used to be in our humble opinion. We must also add that hybrid-rugged devices aren't for everyone, sometimes consumer or classic rugged works for you but we hope this article broadens your knowledge and you take away that there is a choice when it comes to TCO of rugged devices.